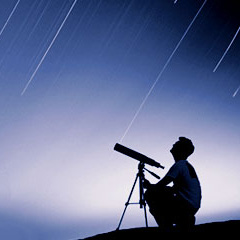 With little to no light pollution, Mercey Hot Springs is a fantastic place to see a sky filled with stars at night. Be sure to come and visit during one of the many meteor showers!

Active from January 1st to January 10th (Peak night: Jan 2-3)
The Quadrantids have the potential to be the strongest shower of the year but usually fall short due to the short length of maximum activity (6 hours) and the poor weather experienced during early January. The average hourly rates one can expect under dark skies is 25. These meteors usually lack persistent trains but often produce bright fireballs. Due to the high northerly declination (celestial latitude) these meteors are not well seen from the southern hemisphere.

Active from April 16th to April 25th (Peak night: Apr 21-22)
The Lyrids are a medium strength shower that usually produces good rates for three nights centered on the maximum. These meteors also usually lack persistent trains but can produce fireballs. These meteors are best seen from the northern hemisphere where the radiant is high in the sky at dawn. Activity from this shower can be seen from the southern hemisphere, but at a lower rate.

Active from July 11th to August 10th (Peak night: Jul 26-27)
The Alpha Capricornids are active from July 11 through August with a “plateau-like” maximum centered on July 29. This shower is not very strong and rarely produces in excess of five shower members per hour. What is notable about this shower is the number of bright fireballs produced during its activity period. This shower is seen equally well on either side of the equator.

Active from July 13th to August 26th (Peak night: Aug 11-12)
The Perseids are the most popular meteor shower as they peak on warm August nights as seen from the northern hemisphere. The Perseids are active from July 13 to August 26. They reach a strong maximum on August 12 or 13, depending on the year. Normal rates seen from rural locations range from 50-75 shower members per hour at maximum.The Persesids are particles released from comet 109P/Swift-Tuttle during its numerous returns to the inner solar system. They are called Perseids since the radiant (the area of the sky where the meteors seem to originate) is located near the prominent constellation of Perseus the hero when at maximum activity.

Active from October 4th to November 14th (Peak night: Oct 21-22)
The Orionids are a medium strength shower that sometimes reaches high strength activity. In a normal year the Orionids produce 20-25 shower members at maximum. In exceptional years, such as 2006-2009, the peak rates were on par with the Perseids (50-75 per hour). At this time we are unable to predict exactly when the Orionids will be exception.

Active from November 5th to November 30th (Peak night: Nov 17-18)
The Leonids are best known for producing great meteor storms in the years of 1833, 1866, 1966, and 2001. These outbursts of meteor activity are best seen when the parent object, comet 55P/Tempel-Tuttle, is near perihelion (closest approach to the sun). Yet it is not the fresh material we see from the comet, but rather debris from earlier returns that also happen to be most dense at the same time. Unfortunately it appears that the earth will not encounter any dense clouds of debris until 2099. Therefore when the comet returns in 2031 and 2064, there will be no meteor storms, but perhaps several good displays of Leonid activity when rates are in excess of 100 per hour. The best we can hope for now until the year 2030 is peaks of around 15 shower members per hour and perhaps an occasional weak outburst when the earth passes near a debris trail. The Leonids are often bright meteors with a high percentage of persistent trains.

Active from December 4th to December 16th (Peak night: Dec 13-14)
The Geminids are usually the strongest meteor shower of the year and meteor enthusiasts are certain to circle December 13 and 14 on their calendars. This is the one major shower that provides good activity prior to midnight as the constellation of Gemini is well placed from 10pm onward. The Geminids are often bright and intensely colored. Due to their medium-slow velocity, persistent trains are not usually seen. These meteors are also seen in the southern hemisphere, but only during the middle of the night and at a reduced rate.

Active from December 17th to December 23rd (Peak night: Dec 21-22)
The Ursids are often neglected due to the fact it peaks just before Christmas and the rates are much less than the Geminds, which peaks just a week before the Ursids. Observers will normally see 5-10 Ursids per hour during the late morning hours on the date of maximum activity. There have been occasional outbursts when rates have exceeded 25 per hour. These outbursts appear unrelated to the perihelion dates of comet 8P/Tuttle. This shower is strictly a northern hemisphere event as the radiant fails to clear the horizon or does so simultaneously with the start of morning twilight as seen from the southern tropics.